This is a pretty great time to be a scuba diver here in Maryland!  A new quarry, Juturna Springs, is getting ready to open up (next week) and if the rumors are to be believed (verified today), it’s going to mean that I can teach Advanced Open Water without the 3-hour drive up to Dutch Springs (a place I love BTW).  If the other rumors are true, this may be the only place for hundreds of miles that will be an appropriate place for inland deep water technical dive training.

Let’s start with some logistics.  As of today there wasn’t any signage indicating the entrance to Juturna Springs.  That will probably fix itself next week, but in the unlikely event it doesn’t, lemme help you out.

If you roll in and follow your Waze, Apple Maps, Google Maps, whatever and see the photo to the right with the “COMUS” sign, look behind you because Juturna Springs is on the other side of the road!

The official opening date is next weekend, but the folks at Juturna Springs were nice enough to let DWF arrange a sneak peek with some of the other PADI Pros from Columbia Scuba.  It’s been quite awhile since I got the chance to try out a new local quarry (I haven’t lived in MD that long), but talking to other folks it’s been decades since a new quarry opened up, so color us all lucky! 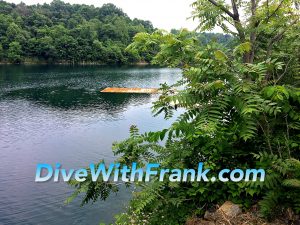 Once we found the entrance we looked for a parking spot.  As of today they’re not clearly marked.  Once we got parked our eyes were immediately drawn to some of heavy equipment nearby.  We also headed down to the water to see the three platforms which are to be put in within the next week (perhaps even today after we left).

Four of us from Columbia Scuba were there today to take the quarry for a spin.  We spoke with some of the other instructors there and were given the parameters of where it was okay to dive today.  My favorite part of the conversation was where we could hit 130 feet!  Nobody in our group was in the mood for a dive to that depth (especially the guy in the wetsuit), but it’s great to know those dives will be available.

Our group got geared up and made our way into the water.  Right now there’s a bit of a peninsula we traversed to get into

the water.  The “ramp” area is where many fish have chosen to nest so some thought will need to be put into the best place for

entries.  In the area we picked for diving most of the ground was covered in a lush green sort of underwater grass.  There was a distinct thermocline near 20 feet.  Distinct enough that I got a photo of it.

The visibility varied from about 10-30 feet.  Every once in awhile it got down to maybe 5 feet, but nothing like the almost blackout conditions that we’ve experienced at other local quarries.  All in all the VIZ was pretty darn good.

The only “attraction” we saw today was some concrete piping that had been laid out, clearly for us divers.  Don’t bother asking if we swam through ’em.  You know that we did.  Also, the rumor mill says that they’ll be sinking a C-130 in the near future. 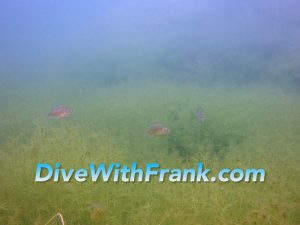 We made our way around the outer wall of the quarry.  A couple of things that I really liked about the new quarry was lots of sunken trees, and many flat areas covered in that grass.  For beginning divers those areas are really ideal for touring the quarry.  Lush enough for us to work on our buoyancy (and pretend we’re over a coral reef) and shallow enough (20-25 feet) that nobody has to worry about students dropping off a deep dark ledge 🙂

Now I talk about how I’m looking forward to being able to do a “deep” training dive, so of course I had to verify we could get to 60+ feet. 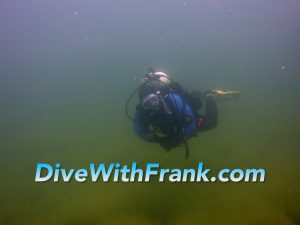 The bottom line today was that Juturna Springs is almost ready!  The infrastructure is being put in and the basics will hopefully be ready by next weekend.  Either way I’m certain this place will be a lot of fun this summer.

If you want it to be perfect then next weekend might be a little early, but if you’re excited about diving and ready to try a new place then take Juturna Springs for a spin!

Near Term & Future Infrastructure Updates I’ve talked to the folks there about:

The JS guys will be working on adding new infrastructure all summer, so this is going to be fun.

This site uses Akismet to reduce spam. Learn how your comment data is processed.

I hope everybody is staying safe and healthy during this time. As we all continue to deal with the challenges of the COVID-19 pandemic, we’re coming up with new and […]

This weekend was a big one up at Dutch Springs (Bethlehem, PA) with the Dutch Springs Dive Expo happening.  I figured it was going to be pretty busy up there […]

It’s been a long, dark, chilly, winter and DWF is just itching to get back into the (local) water.  With the local water temperatures hovering near the low 40s F, […]

For some of us out there scuba diving isn’t so much of a hobby as an obsession, and we take every opportunity to shout it from the rooftops! I’m also […]

Winter may be here, but that doesn't mean you can't keep those scuba skills sharp. Several classes can be taken over the winter without even getting into the water.

DWF has been scuba diving for 10 years and this is BY FAR the most amazing diving I've ever done.  The bio-diversity and richness that I saw on dive after dive was something that I have not seen [...] 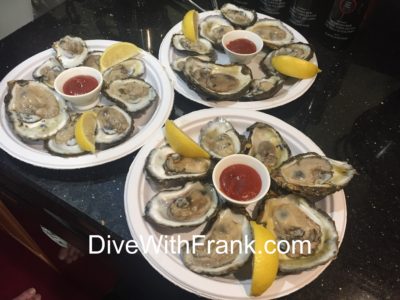 DWF is going Oyster Diving on November 6th, 2021! Do you love diving? Do you love fresh oysters? Well put those two things together and you have the recipe for […] 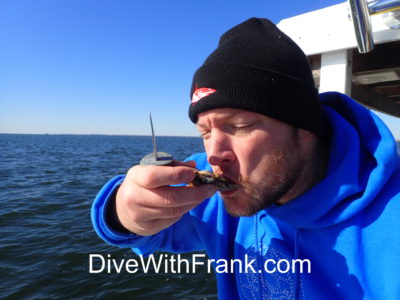 DWF is going Oyster Diving on October 9th, 2021! Do you love diving? Do you love fresh oysters? Well put those two things together and you have the recipe for […]